On the one hand, this makes me feel a bit old. Not ancient, certainly, but not young, either. I’m 38, after all, which has made me the senior person to most FLOSS projects I’ve contributed to, or at most meetups I’ve gone to, but fortunately, I also talk or work with a number of people in the field I greatly admire, that are 5 to 15 years ahead of my own age. So.

Well, most of the time I don’t. Sometimes I do catch myself thinking “man, 38 already, and what have you accomplished? Where’s your startup-turned-big-success? Or your project-that-changed-the-world?”. But see, it’s not just that this could still happen, however faint or random the chance of that is. It’s mostly that I revised my goals, or more exactly, I revised my priorities.

I found my better half 14 years ago, which was quite early in my life. I’ve been my own boss, and running a pretty successful business that lets us live quite large, for almost 5 years now. 9 months ago, I hired my first employee, and that’s a full-time, well-paid engineering position. And 8 months ago, I finally became a father. My son Maxence is everything I could have hoped for, ten-fold.

I’m not even remotely interested in moving to the valley and playing Bubble-yet-again. I have health, home, family, friends, love and a decent amount of success. I even have a tiny slither of professional fame, for what it’s worth. If that’s not a great place to be, then I don’t know what is.

Still, 20 years. Damn. That’s something. And what years these have been! Especially the first half. I’ve been incredibly lucky, although I do take credit for seizing the opportunities I was blessed to find on my path.

Allow me to reminisce.

On January 16, 1996, sometime in the vicinity of 19:00, I got out of what amounted to my first job interview and sat down at a Windows 3.11 For Workgroups workstation to start seeding a Paradox database used by a large Delphi program.

This was at a small company in Paris that was then pretty much at the top of the Borland game, Europe-wide. Delphi 1 had gone out the year before and pretty much H-bombed the whole Windows development world. In 1996 and 1997, Delphi 2 and Delphi 3 would have the same effect.

You’ve got to remember (or learn, you youngsters) that Borland had invented IDE’s all the way back in 1987 with Turbo Pascal 4, and ruled supreme in the development tools universe. 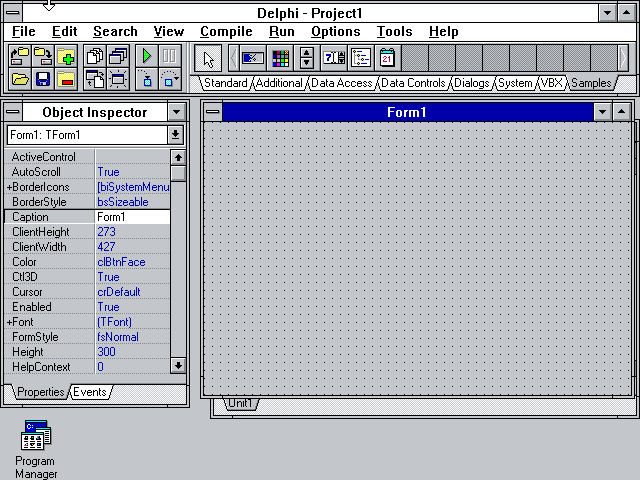 My company featured an incredible R&D team, average age 21 maybe, from whom I could learn an enormous amount of technical and professional skills in a short time span.

In March 1996, I started training professionals on Delphi, through that company. As months went by, I trained more and more difficult courses, and moved up the R&D ladder to full-fledged engineering and architecture. And on November 4, 1997, the day I turned 20, I gave two major, cutting-edge talks at BorCon France 97, the nationwide conference on Borland tools.

A year later, I was at Borland US in Scotts Valley, California, working at the Delphi PSO department and later contributing to Delphi R&D, as we were working on the upcoming Delphi 5. I then moved back to Paris, in order to finish my Masters in Computer Science, intending then to get back to the US once done.

But 4 months later, in May 1999, I got wilfully recruited to a “dream-team” of 3 that was supposed to write, from scratch, a full-blown ISP portal that would serve as subscribers’ homepage, aggregating data from well over 20 sources in a hodge-podge of formats to produce its contents, and it all had to be in J2EE. Which, back then, had a huge “Alpha: Preliminary Draft” slapped across all its specs, a horrendously slow and buggy JVM, and only one sort-of-server-that-crashed-once-a-day called Java Web Server. Oh, and yes, this had to be done in three weeks.

Back in 1999, we still thought Java and XML were actually good ideas.

You have to remember, back in 1999, we still thought Java and XML were actually good ideas. The web server side was C, FastCGI and Perl back then, and none of the mammoth over-architecture trends that later ruined that ecosystem was there to deter us yet, so we had mitigating circumstances. We did manage to sneak in a Scheme interpreter, though.

And we pulled through. On June 15, 1999, at 10:00 in the morning, we unveiled version 1 of Freesbee.fr, after 21 days of 16-hour work. It paid for my final year of IT college, you know. It also got me into Java, although Windows desktop development was still very much a thing, and I still wrote a ton of Delphi.

Early in 2000 I co-founded (with no less than 20 others, to be fair) a small bootstrapped software agency called Posse42. In June, I quit my (almost continuous) 5-year stint at the Delphi company to become R&D director there, a not-quite frictionless move. By that time I had taught about 3,000 hours of professional Delphi training.

We did amazing stuff for about 18 months, and then ran through 2 cycles of bad luck with investors when we needed external cash to grow enough for ambitious projects that had come our way. So instead of playing hide-and-seek with the fiscal administration, we decided to close up with dignity, and everyone found themselves nice new jobs within 2 months.

I decided to enjoy the early-closing money I’d got and to try my hand at freelance software architecture for a while. But I discovered I wasn’t quite there yet as a person, not ready to seriously freelance, and earned my lowest income ever across these 10 months.

Which is when I got head-hunted to pretty much co-re-fund, with 3 other guys, an IT college that was supposed to be a kind of UFO in that space. We had carte blanche to design the entire, 5-year curriculum, could grab dean seats for every major department, and would have to do pretty much everything ourselves: hiring teachers for the less-technical courses, wiring the building up, procure, unpack, install and set up 200+ student workstations, create course materials and teach them, and so on… 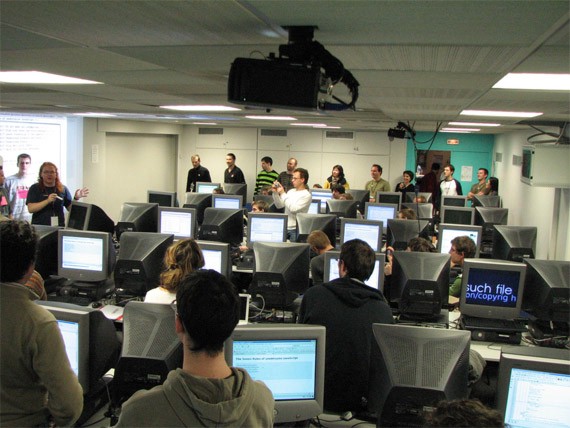 This was to be the first IT college that would run as “alternance,” in our case settling on a 3-days-a-week at work, 2-days-a-week at school rhythm, for the last 3 years. It would therefore be much cheaper (6x cheaper, basically) than traditional IT colleges, and would be a strictly dossier-and-interview-based, let’s-not-snob-the-usual-rejects admission process. We had a chance to design our dream IT college, and we did our best for 5 years, 2002 to 2007. This meant putting our personal careers in a sort of stand-by during that time, and dedicating roughly 70-hour weeks to helping others rise and make great career starts. You bet we signed up.

And despite a number of bumps on the road, and a few failures, there have been a number of great successes. Across these 5 years I learnt a ton, not just technically but as a human being, manager and coworker. And I taught another 3,000 hours of class and graded over 5,000 assignments across such courses as Delphi, Bash scripting, C, C++, SQL, PHP, Java, J2EE, Ruby, Rails, HTML, CSS or JavaScript.

I had gone deep into Web techs in the meantime. In 2005, I discovered Ruby and Rails and fell in love immediately. In 2006, I released my first major book, a 555-page French best-seller on front-end web development. In early 2007, I joined the initial core team for Prototype.js, the library that would inspire jQuery and inform ES5. And since 2006 up to this day, I’ve been on staff for Paris Web, the biggest French-language web conference in the world.

Then the college got acquired by one of these few large groups that run most of the private higher education in France, and do a terrible, terrible job of it. Everything we’d carefully and painfully built started being systematically dismantled, so the whole core team quit in the space of just one year. I moved on to a web agency that hired me as CTO and let me do a tabula rasa on their technical stack and hiring ex-students of mine as engineers to build up their development team.

For 5 years, we built a Rails-based, tailored e-commerce solution that could give all the major players in the field a run for their money. We shipped over 30 e-shops for SMB’s and, for many of them, grew their business by one or two orders of magnitude. Other departments in the company did SEO and SEA, and I learnt a ton from them in these areas.

In the meantime, I also wrote the reference book on Prototype.js and script.aculo.us, at the Pragmatic Programmers, and their Pragmatic Guide to JavaScript book.

Get back to what I loved best: sharing knowledge

But when it became all too apparent that the two main execs of the company were playing a small-win, borderline-crook game with their client strategy and wouldn’t do what it takes to actually reach the goals we had set together, I decided to become my own boss this time. And get back to what I loved best: doing R&D, sharing knowledge in general (training, speaking, writing, mentoring…) and giving back to the community through open-source contributions, sponsoring and more.

Which is how I founded Delicious Insights in 2011. And moved to it full-time on November 12, 2012. Three years later, we’re a national reference for the few topics we do train on: front-end web dev, Node.js, Git and GitHub. We’re training internationally now, from Bulgaria to Arizona, even if 99% of our business is in France for now. We’ve trained over 1,000 people by now, and I’ve racked up yet another 2,000 hours.

8,000+ class hours as a professional trainer or teacher

We’ve just produced two series of video training courses on GitHub for O’Reilly. Last year I did a “Git world tour” of training for a client across 6 sites in 5 countries including the US. We’re working on the first of our two SaaS projects, and there are 3 more top-notch training courses in the works for 2016.

And here we are.

My son turns 8 months old next Monday and he’s amazing. My wife snuggling against my chest and inside my arm when we just got to bed remains one of the best feelings ever.

Here’s to the next 20 years. And if I have any say in it—which I do!—you haven’t seen anything yet.

Thank you for reading.

Check out our video courses! 🖥

Our screencasts are the ideal, affordable complement to our tech articles and in-room training courses, tackling Git, JavaScript and other topics. Check out these high-quality, affordable courses that are specially crafted to take on your biggest pain points and roadblocks.